Congratulations to Hal Sandbach for receiving his MSc in Psychology 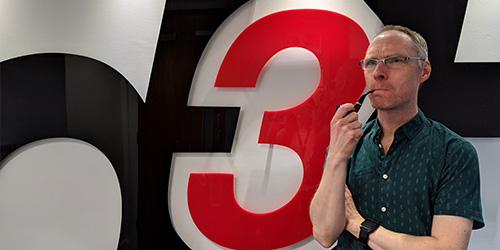 Congratulations to our Head of Design, Hal Sandbach who has received his MSc in Psychology…Our Head of Design, Hal Sandbach recently received his MSc in Psychology from the University of Roehampton. Hal wanted to learn about psychology because it has a huge crossover with game design. After all, the same game will appeal to some people more than others, so there must be a lot going on in the brain that is outside of the actual game mechanics. The understanding of this crossover is becoming increasingly well-known and studied in academic and game design circles.

The course itself was not focused on games, but did involve looking into aspects such as motivation, learning and personality. For the final module, he carried out a quantitative study into how gamers could be influenced to behave in more or less social ways. This took into account how games have been shown to influence behaviour and outlook, and is more directly relevant to what we do than the more generic subject matter of the course.

Along with general on-going support from d3t, our other global KWS family got involved too; Keywords Studios helped Hal with this by sharing out his survey in one of the bi-monthly news emails, so anyone who completed that contributed to the results. Congratulations Hal!