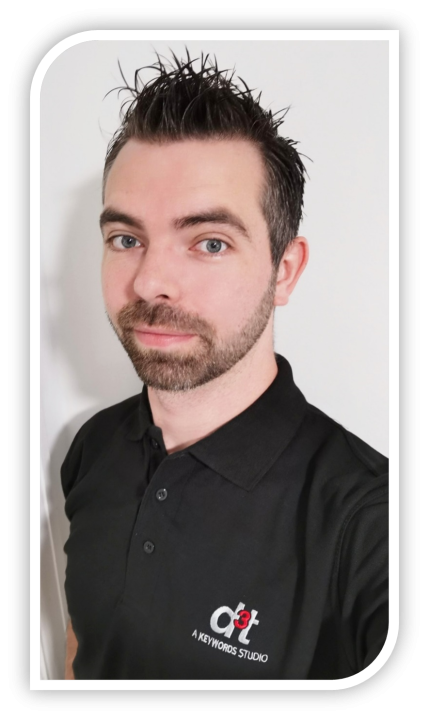 Please detail a bit of information about your experience/career background?

I started working in the games industry nearly 13 years ago as a QA Tester for a 3rd party testing company. From there I joined Lionhead, Crytek and finally Stainless Games. During my time at Stainless I had been playing around with VFX in my spare time as I was looking to transition away from QA. I had tried loads of different disciplines before VFX, like level design and animation but none of them really clicked. It wasn’t until I started messing about with explosions, slashes and sparkles that I found what I really wanted to do.


Luckily for me, Stainless gave me the opportunity to work as a VFX artist on one of their games and after that I became the VFX guy for them, working on several projects. After just over three years in the role, I was approached by a VFX recruiter about d3t, and decided it was time to stretch my legs and join the team.

When I found out about d3t, the concept actually seemed quite alien to me, as I had only worked over full dev cycles during my time in the industry. I decided to join d3t because, as a co-dev studio, they have a multitude of projects running, with different styles and challenges for me to get my teeth into, and the opportunity to work alongside various external VFX teams and learn their workflows was just too appealing. VFX is such a broad area with so much to learn it just seemed ideal. Additionally, the interview process was great, with tons of information and support offered, and the people just seem really nice, so I think I am going to enjoy my time here!

What do you love about games?

As a kid I was always a sucker for bright colours and flashing lights, and as I hit my teens the competitive adrenaline rush you get from multiplayer games really became the hook. That’s changed a bit now I am in my 30’s. I still play the odd multiplayer shooter or MOBA, but most of the time I just want to lose myself in beautiful expansive worlds, and my love for VFX means I can’t play a game at normal pace anymore. I have to stop and look at each effect, sometimes stopping playing altogether to see if I can recreate elements of it before getting on with the story.

What games are you currently playing, and what is your favourite game?

I am currently playing Monster Hunter Stories for my solo choice, and Overwatch to scratch that competitive MP itch. Both games have art styles that I love too.

As for a favourite game there are too many to pick from. From a VFX perspective Nino Kuni 2 was just stunning and is probably my favourite to date, but if we are talking about hours played AOE series/Civ series and Overwatch are the top 3 by far. That being said there are so many amazing games I could mention as I have 50 favourites all for different reasons.

Do you have any fun facts or hobbies?

No fun facts I’m afraid! But about four years ago I got into D&D, and I wish I’d have started sooner. I am a player and a DM and it’s some of the most fun I have ever had.

I have also just gotten a Golden Retriever which we named Deku. People think that’s from My Hero Academia, which to be fair would have been a great choice, but he was actually named after the Great Deku Tree to pay homage to Zelda.

I also have a Conure and a Parrotlet called Ghibli and Hiro. As you can probably tell, our household can be a bit noisy and very geeky.