This month we shine the spotlight on our production department and caught up with one of our Senior Producers, Chris Walter. Chris tells us how he got into the games industry sharing tips along the way, and goes into detail about what a typical day is like for him as a senior producer at d3t.

I discovered my love of Production during University. My degree was in Games Design originally and as I entered my final year I realised two things:

The latter is a core part of what a Producer does here at d3t. 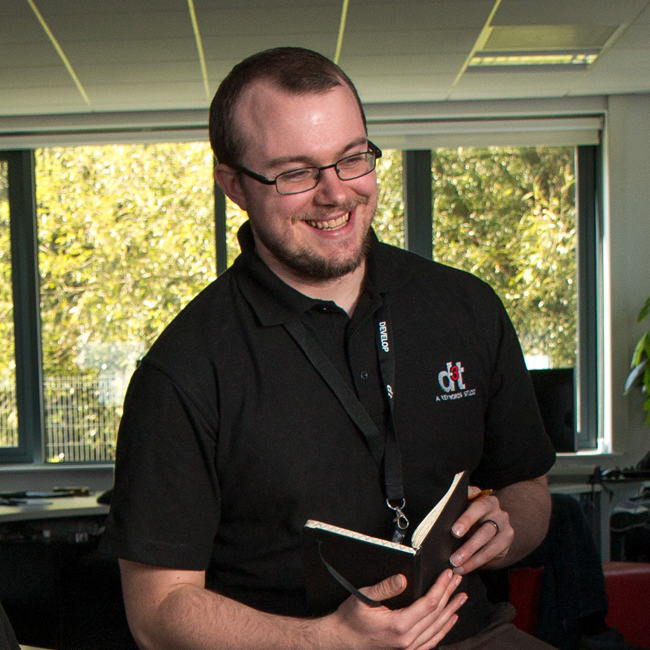 I went to Teesside University and they have a showcase called Expotees for all final year students to show off their work. My final year project was a game that I made in Game Maker that aimed to teach children how to touch type. Expotees also had what was called the Vis Awards (now called Expotees Awards), which allowed students to put forward their work to a number of industry experts for awards that had internships as prizes. One of the awards was called the “CBeebies Pitch Award” which involved students presenting their final year projects to a panel of judges, with the prize being an internship with BBC Children’s (The joint department of the channels CBeebies and CBBC). My internship at BBC Children’s ended up turning into a full-time job where I was able to move into Games Production, making games for their website and mobile apps.

Prior to joining d3t I had been working in Games for about 7 years and had previously worked with Richard Badger (d3t Head of Studio). Whilst I had been in Production for a while, I had either been working in a specific pipeline (animation) or more as a client/outsourcing producer. I had always wanted to move into working on the actual development side properly. The belly of the beast!

I saw that d3t were hiring a Project Manager and sent in my CV and Cover Letter. I was then asked to do a Production Test and following that I was invited to an interview and the rest is history!

Whilst working at d3t, the Production department has really grown and during that growth, I was given the opportunity to step into a Senior Producer role which is the job I do today.

Top Tip: If you’re at University, always put yourself forward for opportunities to show your work to industry experts and your peers. You get great feedback and you never know where it might lead! The same goes for applying for jobs, even if you don’t think you’re qualified for the job you’ll likely get some feedback and it can help work out where you are at in your career, and what skills you need to develop. You might also get the job.

My days are typically very varied, but they definitely always start the same – emails! d3t is partnered with amazing studios all over the world so there can be a lot of movement and communication happening whilst I’m asleep. I always spend the first bit of my day catching up and building up my to-do list from there.

Then we have our morning Stand Up meetings. As a Producer it’s my job to gather everyone on my projects, find out what they’re doing and if there are any problems we need to solve or questions we need to ask. I make notes and keep people focussed on the stand up if the joking around gets too much – which is fairly common!

My day almost always involves meetings, whether that is Production department catch-ups, calls with our development partners, Studio resourcing meetings, one-to-ones with our Associate Producers (who I line manage), or facilitating discussions and planning sessions with my projects. Most of my day is spent on Zoom or Microsoft Teams.

From there I have a pretty packed to-do list, most of that involves talking to people and facilitating the flow of information. Producers are the lynchpins of projects at d3t as we are funnels for communication. When I’m not talking to people I am likely spending time on Jira making sure that tasks are being worked on and are on schedule, or in Excel creating and amending schedules and other information.

Then often my day ends as it begins – I send off emails to people with updates from the day, any questions we need answering or any critical information. Then I make a few notes of things that I need to do the next day.

No two days are the same in the Production department at d3t. You have to be very flexible and adapt to the challenges that each new day brings. It’s not always easy, but it’s incredibly rewarding knowing that you end each day having helped people make great games.