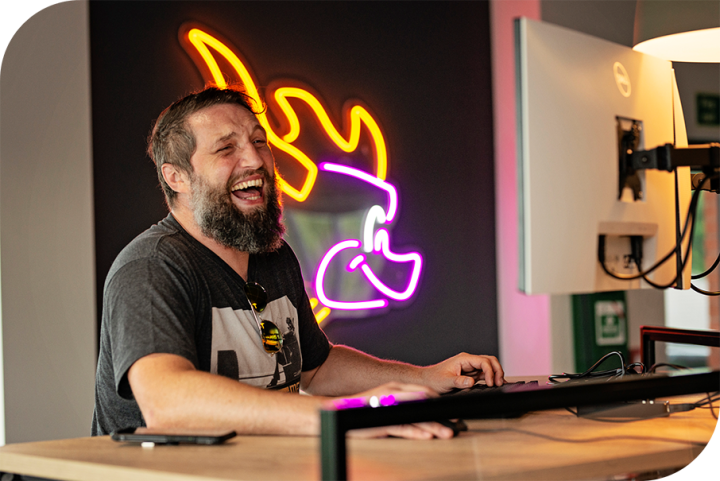 Originally I was testing for another company and d3t were contracted to fix the bugs I found. I attracted d3t’s eye with bugs like one in which the repro involved having to lick the phone screen! I was very proud of that one.

After this I was made a Contractor for d3t and worked with them in their original building right near the ship canal. My main job with them was as a Tester, working on many different titles. Of course, back then we used to make industrial/commercial software alongside the games, so over the years I have tested some very weird stuff. For instance, we once made a smart handle for an industrial powder dispenser.

I was then given my first design contract for Lemmings Touch on the PSVita. During this I got to design a bunch of levels for a game I used to adore which was fantastic!

After some time, d3t gave me a full-time contract, which saw me progress to the position of QA Manager.

I then left for a couple of years to pursue a job in education but was thankful to then return once more to the studio in a role that I had always wanted – Designer.

One thing that I have always admired about d3t is the way that it treats its employees. The care taken has been evident right from the very start. As someone who has worked in many varied jobs over the years (Chef, Service Staff, Background Actor, University Lecturer, Warehousing, Building, Martial Arts Instruction, Promotions, Call Centres, Offices – to name a few) I can tell you that the standard here is miles above any other employer that I’ve ever seen. Working for d3t has been the best job I’ve ever had. They let me be me and don’t mind when I act the fool or make a lot of noise. Something I like to do often!

My usual day has me liaising with my colleagues and the client to determine their needs. I create designs and then create the materials I need to explain the idea to others. Usually, I will then present the designs to the client and will work with them until they are happy with the proposal, so that we can then move towards implementation.

Currently the project that I am working on has given me lots of room to come up with ideas and experiment, which as a designer is quite literally the best thing.

Recently I have also been able to go and visit some Colleges and Universities such as Futureworks in Manchester and Stoke University’s GradEx competition, where I have been fortunate to speak and pass on wisdom to the next generation of game developers.

Also, since d3t has now installed a BBQ in the studio’s garden, I have been quite regularly bringing in food to cook at dinner times, which is very cool!

Many. I have a thirst for helping students prepare themselves as in my experience, I have often felt that the courses I attended were very much lacking. Thankfully nowadays there seems to be a much better range of courses available but the standard of entry is constantly creeping upwards.

My advice for Designers is to create some designs for an existing game – preferably choose a game that your target studio makes. Design a new level/character/mechanic to go with the game. For this you should justify why you chose the aspect that you did. If it is a character for example, what does this character add to the game and how does it balance against the others.

If you were making a new character for Street Fighter for example, what does the character have that the others don’t? How does this character fit into the line-up? Do its attributes feel correct for the game?

If you are making a new arena for a PvP game – what does your arena bring to the table? How does it fit with the other levels? How are you focusing the play into the areas you want?

Finally, the games industry likes it when people are active outside of work/their studies. So, it is important that you ask yourself, what have I created recently, as studios will want to see work that you have created recently not from a few years back during your course.

Stay tuned for more spotlight features coming soon. In the meantime, if you’re feeling inspired and want to join our team, check out our vacancies page!