There are many ways you can get into the games industry, including securing an internship. One of our 2020 programming interns was more than happy to be featured as the spotlight for December. Sophie Carroll joined us in June 2020 and has shared a bit about how she got an internship at d3t and what life has been like at the d3t studio so far. 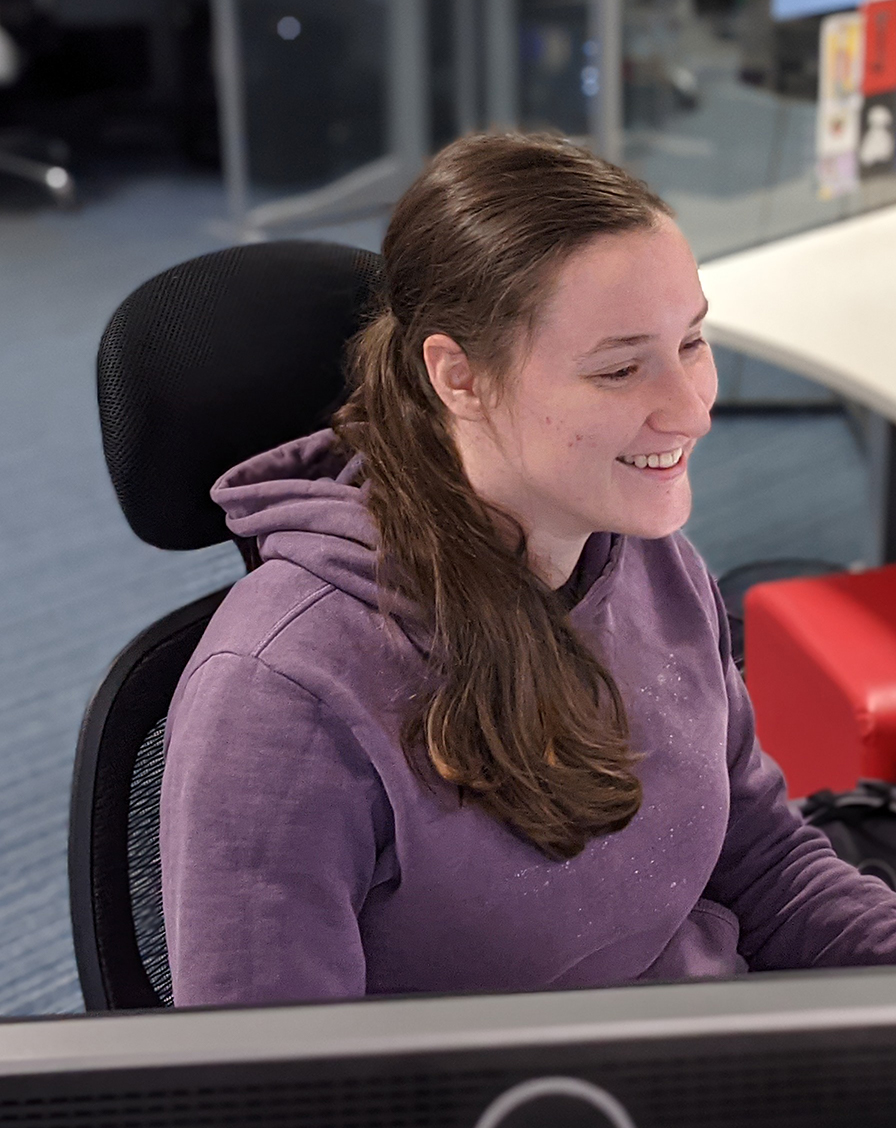 I first heard about d3t at one of Liverpool John Moores’ careers fair at the beginning of the second year, when some of the guys from d3t came to visit. Not long afterward the Head of Engineering, Phil Owen, visited to give a presentation that offered tips and guidance on how to secure a job or internship. Here I was able to bombard him with my many questions, which I think made quite an impression on him! Attending his presentation really helped in securing an interview, but alongside that, doing personal projects in my own time and already having a summer internship under my belt allowed me to stand out against other applicants. I also ensured I had an online portfolio set up beforehand.

I started applying for internships pretty early (around October/November), as a lot of the good places tend to open up around then. Not long afterward I was invited to take a programming test, which was really fun to do. I was invited to take the test at an awkward time for me though, as I had a lot of exams and assignment deadlines coming up, but Phil was really accommodating and understanding, letting me wait to take the test once my schedule became lighter.

Once I passed the test, I was invited to an interview with Phil, Sally (our Talent Acquisition Manager, who does a wonderful job of communicating the application and starting process), and Sarah (one of our Lead Programmers). It was a very relaxed interview which was very welcoming, and then 24 hours later I received an email from Sally to say I got the role! I started at the beginning of June, and d3t was very happy for me to start at a time that suited me best.

When I submitted my application for an internship, I never dreamed I would even hear back, let alone go all the way and be offered a position. Working here is a dream come true!

Life at the d3t studio so far

Like a lot of people here, I also cycle to work most days and the first thing I do when I get in is make a cup of tea to start off the day. I then spend a few minutes catching up on any updates and reminding myself of any progress I have made. I usually get in relatively early which allows me to get an hour or two of work in before the stand-up meeting. Most people are working from home due to the current pandemic, so virtual stand-ups are a great tool for not only catching up on the previous day’s events but also as a great way to get some social interaction in.

When I first started I was initially put on a project to develop an in-house automated smoke testing tool. To my surprise, it was a solo project (for the most part, as there was already an initial framework set up). This goes to show the level of trust and confidence d3t have in you – you won’t just be making the coffee! However, I was also provided with a fantastic support network, so I wasn’t just left alone to struggle when I needed help. They assigned a programmer to buddy up with me and he was brilliant in answering all my many questions, as was everybody else when I had specific questions about their area of expertise.

I spent around 4-5 months on that project before being moved on to the next. Now I am working on gameplay and input for a triple-A project – which is insane to me when only two and a half years ago I had never done any programming in my life! I am continuously both shocked and grateful that d3t has given me this opportunity. Being in the studio has also allowed me to take time to learn about other roles in addition to my own. I often speak to artists and QA and spend time getting to understand their pipeline.

I would recommend an internship to any student. The experience I’ve gained is invaluable and working with such passionate and knowledgeable colleagues has been life-changing.

Stay tuned for more spotlights in 2021. In the meantime, if you’re feeling inspired and want to join our team, check out our vacancies page!