This month we shine the spotlight on our QA department and caught up with Thomas Bulger. If you ever wondered what a typical day is like for a QA tester in the games industry, then read on…

Before starting the Embedded QA role at d3t I was working for Sony at their Playstation First-Party studio based in Wavertree Technology Park in Liverpool. Although I loved my role at Sony as a Functional Tester, I really wanted to dig deeper within the QA role, so I did some research on different gaming studios within the Liverpool area. d3t really stood out to me for numerous reasons. Not only does the company have an amazing portfolio, but they have also won the gamesindustry.biz Best Places to Work award on numerous occasions.

I sent over my CV and cover letter and shortly after I was invited to an interview for a QA role. Although interviews can be quite daunting, as soon as I stepped into the studio the team were extremely welcoming and friendly which made me feel at home. The interview lasted roughly over an hour and although I was being interviewed, I also got to ask some questions about working at d3t which really helped in providing the decision to accept the role. Several days later I was contacted and offered a full-time 12-month contract as an Embedded QA Tester. After the 12 months had passed, I was offered a permanent contract which without hesitation I accepted and have continued to enjoy working here now for nearly two years. 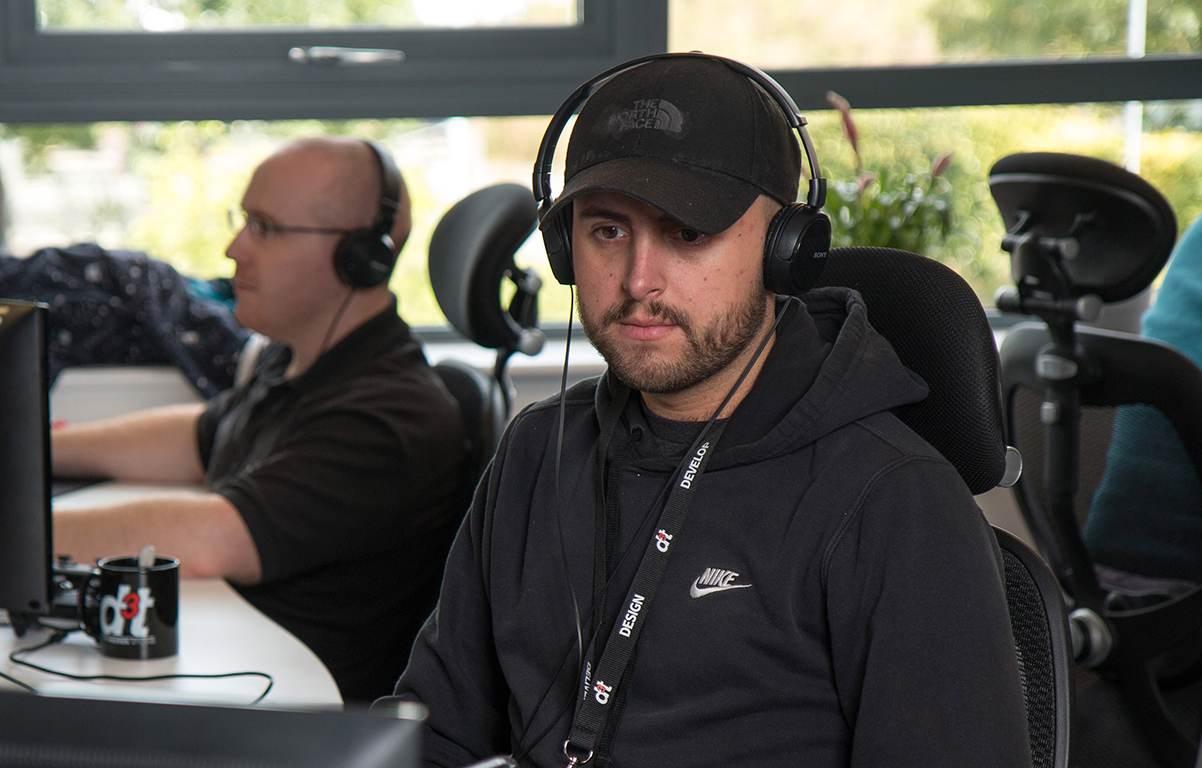 A typical morning would include installing the latest build version of the game and completing basic performance checks to ensure the build is stable and ready to use for the remainder of the day. I also search through the bug database to check for any newly entered bugs, even to see what issues the developers have fixed so I can confirm if the bug has or has not been fixed within the latest build version. Some issues may also need a little bit more information so it’s important that these bugs get checked as quickly as possible so the developers can continue to make changes within certain areas of the title.

Depending on the title needs, a day may be spent creating and completing various test cases. Test cases are a type of checklist used to highlight a specific area of the title. A good example of this would be progressing through the game and attempting to unlock every achievement to make sure they do unlock in their intended way. Once completed we can highlight in the test case areas of concern and send this information over to the developers. As an embedded QA tester, you will find yourself working alongside the developers on a daily basis within a team, so you will spend a large portion of the day communicating with various developers depending on the type of issue you are currently looking into.

As someone who has had the opportunity to lead QA on projects in the past, there are also other title responsibilities other than game testing. You may need to delegate specific tasks to the team depending on title needs. If a title build is close to being released, you would ask the team to focus on specific test cases which will aid in ironing out and finding any potential remaining issues that could fail the build from being submitted.

Triaging issues within the database is another task that is frequently looked at when leading a project. This could be to ensure all the appropriate information is there within the bug for the developers. You may vet the bug and then assign it to a developer you know can fix the issue, or you may do this to check if the issue has not already been submitted into the bug database. Each team is responsible for creating either daily or weekly reports. These reports are used to highlight various details such as the number of issues submitted into the bug database during that day or week. It is also used to describe current tasks QA are working on, as well as any important information that QA want to express to developers whether that be to describe bugs that have blocked any further testing or to provide feedback on certain title changes.

As QA you get the opportunity to be very hands-on with each title and can see sides of the game that developers may not see. Due to this, we have the opportunity to be very vocal and provide constant feedback and recommendations on what we think may and may not work with each title. This allows the developers to then take a look at our feedback and potentially tweak various gameplay elements that will go on to be received positively within the community once the title is released.

If gaming is a hobby then you are already halfway there when it comes to putting your foot in the door of the gaming industry. If you are looking to go down the QA route, then I would recommend taking part in as many Alpha/Beta playtests as possible. When companies release these demos they do this to gain feedback, and this aids towards the bug hunting process and give you an understanding of how to describe any findings when reporting this information back to developers. Similarly, if you are into the modding side of gaming there are plenty of small mod developers out there that continuously vocalise the projects they are working on. Something I have done in the past is contact the modders and ask to playtest what they have created and provide feedback on any findings, this will stand out when applying for the QA role if you have not had any past QA experience.

It does not just have to be about gaming however, you need strong problem-solving skills for the role which is something you can pick up in the various day to day activities. You also need strong verbal and written communication skills, as this will aid towards the bug writing process and when detailing information between yourself and your team.