Women In Code – A Timeline 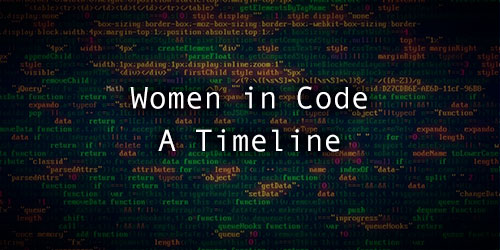 In honour of International Womens Day we have taken the time to honour the important women in coding through history, who have helped shape the industry as we know it today!

designing the first computer algorithm, and explaining how it would work on Babbage’s proposed (but non-existent) Analytical Engine.

invents the frequency-hopping technology that would later allow the invention of wireless signals like Wi-Fi and Bluetooth.

was among the first computer programmers who developed a technology known as software.  The ENIAC was invented to calculate the firing trajectories for artillery shells. It was completed in 1946.

created one of the world’s first compilers (in her spare time). She envisioned code to use English language-based instructions, and her programming language design work led to the creation of COBOL, used to this day.

Named a fellow of the Institute of Electrical and Electronics Engineers, following an outstanding career in computing. She is most well known for creating the branch of computer science called affective computing, following her book of the same name in 1997.

And lastly our very own Sarah Newell, d3t’s Senior Programmer. As a senior programmer, Sarah is in charge of writing, updating and maintaining new and existing projects across all major platforms and languages. Sarah ensures the collaboration of our multi-disciplinary team, and acts as a mentor to the junior team members.