This month our spotlight feature is one of our associate designers, Phil Grealey. Phil joined d3t in August 2016 initially in the QA department. Below, he tells us how he got his job in the games industry and how he got the opportunity to work as a designer.

d3t gave me my first opportunity within the games industry. Prior to this I studied game design and development for three years at Futureworks, Manchester. One of my tutors, who, at the time was also the QA Manager at d3t, encouraged me to apply for a Junior QA role. I first had to pass a practical test before being invited to the studio for an interview. Luckily, it went well and my life at d3t began shortly after.

I spent around two and a half years in a QA role taking lead on several projects. I later got the opportunity to work as a designer on a couple of projects before being offered a design role in late 2019. 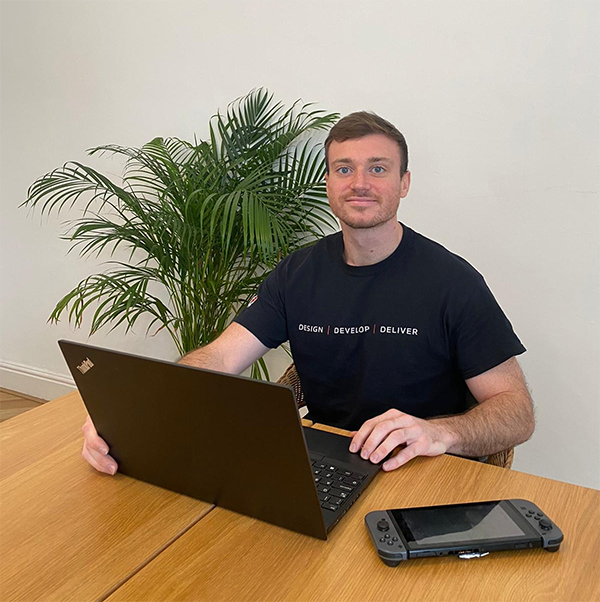 A typical day for me

It really depends on what project I am working on; it can be a mixed bag. However, all days start the same with a morning stand up with the team. This gives us all an opportunity to discuss what we are working on, raise any issues and generally just catch up.

While working on Human: Fall Flat the team were given community made levels. Myself, along with another designer would break them down and discuss what worked well and what didn’t. We tried to stay as close to the creator’s original design as possible, so a lot of the changes were how to make specific puzzles or sections of the level more efficient, or more enjoyable without adding new mechanics or features. I would then come up with trophies/achievements that were unique to each level as well as what music tracks to play and when to trigger them. More tasks would generally follow through the development process and after QA passes. During my time on this project I was also able to fix a lot of bugs which was a refreshing change from finding them as I had in the past. Given my background, I still pitched in with the QA on the project which served as a nice transition between disciplines and made it easier to adjust into the new role.

Having now moved onto a different project, I am now working on the UI design for the PC version of an upcoming AAA title. The work mainly comprises of adapting the existing interface and user inputs to be intuitive and comfortable when playing with a keyboard and mouse. I generally like to mock up ideas and follow with open discussions with the wider team about the most efficient way of achieving our goals, but most importantly what is best for the player.

This is one of the great benefits of a work for hire studio such as d3t. You get the opportunity to work on a variety of game styles and genres, meaning the work is always different, allowing me to gain experience at different aspects of design.

Everyone in the studio at d3t is a delight to work with and there is something to be learned from everyone here. As the studio grows, we are taking on bigger and more exciting projects, and there is no sign of it slowing down anytime soon. Crunch is a well know issue within the industry as a lot of my colleagues have experienced first-hand in the past. However, here at d3t, crunch is not an issue. This, along with the rest really does make for a great work environment and studio culture.

Stay tuned for more spotlights over the coming months. In the meantime, if you’re feeling inspired and want to join our team, check out our vacancies page!