d3t is a games studio that not only works to create the best games possible, but also to develop the best talent too. At the core of the business is a focus on people, growth, and retention, and this all stems from the founders’ desire of wanting to create a games studio whereby people feel valued, and without the overshadowing cloud of ‘crunch’ that the industry was renowned for.

It is this focus that has seen the organisation win multiple Employer of the Year awards not only within the games industry, but also from the wider business community too.

But what truly separates d3t from many others, is its focus on nurturing the next generation of games developers, such as through the studios work with Abertay University in Dundee, where d3t has helped to support the DES310 Professional Project module in which students are set the aim of developing a game within the time span of the course.

This year, d3t worked as a client to an eight student-led team under the name of Fruitcake Studios, briefing the team to create an open-ended minimalistic 3D style game.

With the project spanning across 14 weeks, Fruitcake Studios, first had the job of assigning roles to each team member, before then importantly coming up with the game concept that they would be taking forward.

For Fruitcake Studios, their answer to the brief was to create a minimalist 3D isometric game that would take place within a colourful world, which would then be populated by stylised cartoonish assets all under the name of Ray. Key features of Ray included it being targeted towards 12–18-year-olds, alongside the implementation of a unique mechanic that would lead to more complex level design.

The project saw the team working on their game for three days across each of the 14 weeks, with d3t providing support in the way of bi-weekly feedback sessions, where 15 members of the d3t team across Art, Design, Production, Programming and QA would come together with the students, to cover aspects such as what the team should address, and how the team should plan elements across a production-cycle.

Alongside the bi-weekly meetings, the introduction of breakout rooms were also set-up to great effect. This enabled the team at Fruitcake Studios to have more focused 1-2-1 sessions with specific teams at d3t (e.g., Art, Production, Programming etc.), so that department specific issues could be raised and addressed, with focused feedback then being provided to the students.

This was extremely valuable in particular from QA aspect, whereby d3t’s QA team helped to address a variety of bugs that the game was experiencing through the high-level feedback that was passed on.

However, with bugs fixed and feedback received, it is safe to say that the final product that Fruitcake Studios created, met the initial brief and the results of the game speak for themselves.

The neon visuals worked extremely well, and the professional manner in which the team conducted themselves was exemplary. 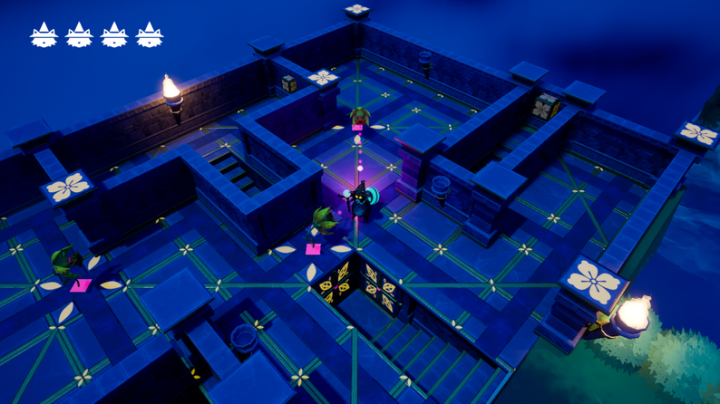 Talking on the project, Stuart Pentelow, ex-graduate from Abertay University, and now Associate Programmer at d3t said: “d3t is full of compassionate and helpful individuals who want to make games education and industry a better place. Our involvement in the module showcases how much we care for the games education space.

“The DES310 module teaches students the realities of game development as most AAA games are not made by singular people. It also helps hone communication and teamwork skills that are essential in the games industry.

“We encourage healthy working practices such as no crunch, and proper schedules/estimations of work to mitigate crunch for the students. If required, we would suggest descoping the project to ensure that the students are able to achieve a healthy working experience at university.

“Ultimately, everything came together. Fruitcake succeeded in producing a beautiful portfolio piece which we sincerely hope will help them land roles in what we all know to be a highly competitive industry.”

Martin Lynagh, Lecturer in Game Production at Abertay University, also commented on the project, stating that: “It was a pleasure to work with d3t as client to Fruitcake Studios, one of our student project teams. The resultant game Ray is a beautiful piece of work and a testament to the effort and sensitivity they exercised when mentoring our students.

“The opportunity to work with talent from such an experienced and respected studio is one that both staff and students from Abertay relish, and we look forward to collaborating with d3t again next year.”

Why not also take a look at the final build of Ray by Fruitcake Studios, by clicking here, alongside viewing the overall showcase here.

Key to note is that whilst involved in this project, d3t did not take the rights to the project and allows the students to still retain their intellectual property at the end of the course. The goal is solely to give back to education.