The Game Developers Conference is the world’s largest professional game industry event attracting 27,000 visitors, exhibitors and guest speakers from across the globe. It provides the forum in which ideas are exchanged and the series of lectures, panels and showcases drive the industry forward.

Put simply, it is the go-to event for those in the gaming industry and this year, d3t’s Steve Powell, Jamie Campbell, Andy Booth and Richard Badger headed off to San Francisco.

Having attended for the last five years, we know the event gives us the opportunity to get the very latest news in gaming innovation and see the launch of products on which we have collaborated. It is also a brilliant opportunity to catch up with existing clients as well as networking and making contact with many others in the industry. The talks were really stimulating, with a good spread of tech, art, production, design and general interest. It was fascinating to see the process of remastering Day of the Tentacle and Grim Fandango, and also hearing about some of the tech used in Forza and Uncharted.

Talks focusing on recruiting and retaining talent – something for which d3t have an excellent track-record – were interesting too…and we’re always looking for new people. A particular highlight was the presentation from Nick Yee at Quantic Foundry on “The Anatomy of Gamer Motivations” which detailed how motivations of gamers vary between demographics.On the show floor it was exciting to see the Amazon Lumberyard stand with such a large footprint – it’s clear Amazon have big plans with Lumberyard and d3t were delighted to be a part of the showreel demoing its capabilities. d3t are proud to have provided technical engineering support on the Amazon Lumberyard GDC tech demo “LOST”, produced by the RealTimeUK team.The event also offers a great way to network in a social environment and GDC wouldn’t be complete without parties hosted by our friends at AMD and NVIDIA. This year’s steampunk theme at the NVIDIA party was fantastic, thanks guys!

Our bug even managed to hitch a ride with Andy and enjoyed a burger… or four! 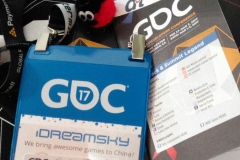 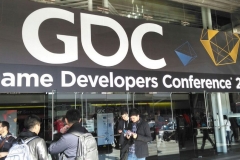 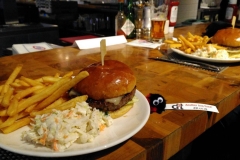 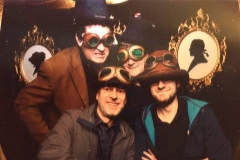 If you’re thinking of attending the next GDC event, check out our series of tips – they’ll hopefully make your trip even more productive and enjoyable.

E3 2016 was, as usual, an awesome event with tons of meetings, networking and of course brand new innovations.

This year, however, was bit a bit special for us.

Sony finally announced the October launch in the UK of the much-anticipated PlayStation VR. They also announced the fantastic games that would be available. Which meant we could finally talk about how we ported Super Stardust Ultra to run on PlayStation VR. And how we rose to Sony’s challenge to find a new way to play the game in VR. We have added a whole new experience to the game with the development of Invasion Zone, which straps the player right into the cockpit for some full on action! Find out more about Invasion Zone.

Gaming conference of the year – GDC2016

ANNUAL ATTENDANCE AT THE GAMING CONFERENCE OF THE YEAR, GDC2016.

Our meeting diary is full – enabling us to spread the d3t word, catch up with old friends and develop new contacts. GDC2016 is certainly a great place to network.

So far we’ve seen a fantastic demo from Geomerics – check out their latest innovation: https://youtu.be/6Fs-4Kvp2nM.

And we’re catching the latest scoops including the awesome games industry news from Sony – the October release at of PlayStation VR at £349!
On a different note – after a dodgy start with the weather, normal service has resumed! What a difference a day makes…And it would be rude not to mention that the food and parties are great too!

We’ll be back soon to bring you the highlights of GDC2016.