In 2019 we announced we were working with 2K on an exciting project. We could finally reveal in May 2020 that we had been working on Mafia II: Definitive Edition, helping bring this title to PC, PS4, Xbox One and Stadia.

As huge fans of the original game, d3t were honoured to be given the opportunity to revive this classic title, bringing it to new platforms and audiences.

The team at d3t hope you enjoy the improvements we have made including improved textures, remastered facial animation, and reworked post-processing. For die-hard fans of the other games in the franchise, we have added in some cool nods to Mafia I and III. Enjoy!

Mafia II: Definitive edition is out now on PC, Playstation 4 and Xbox One as a standalone as well as part of the Mafia Trilogy! https://mafiagame.com/buy/

d3t were engaged by 2K to remaster the sublime Mafia II action adventure game, first released in 2010, for modern gaming platforms. The team at d3t evolved the game’s core engine to support PlayStation 4, Xbox One and Google Stadia, and then made further enhancements to make better use of modern PC hardware. Additionally, the team were tasked to graphically overhaul the game’s visuals, improving the vibrant city of Empire Bay and its cast of colourful characters. 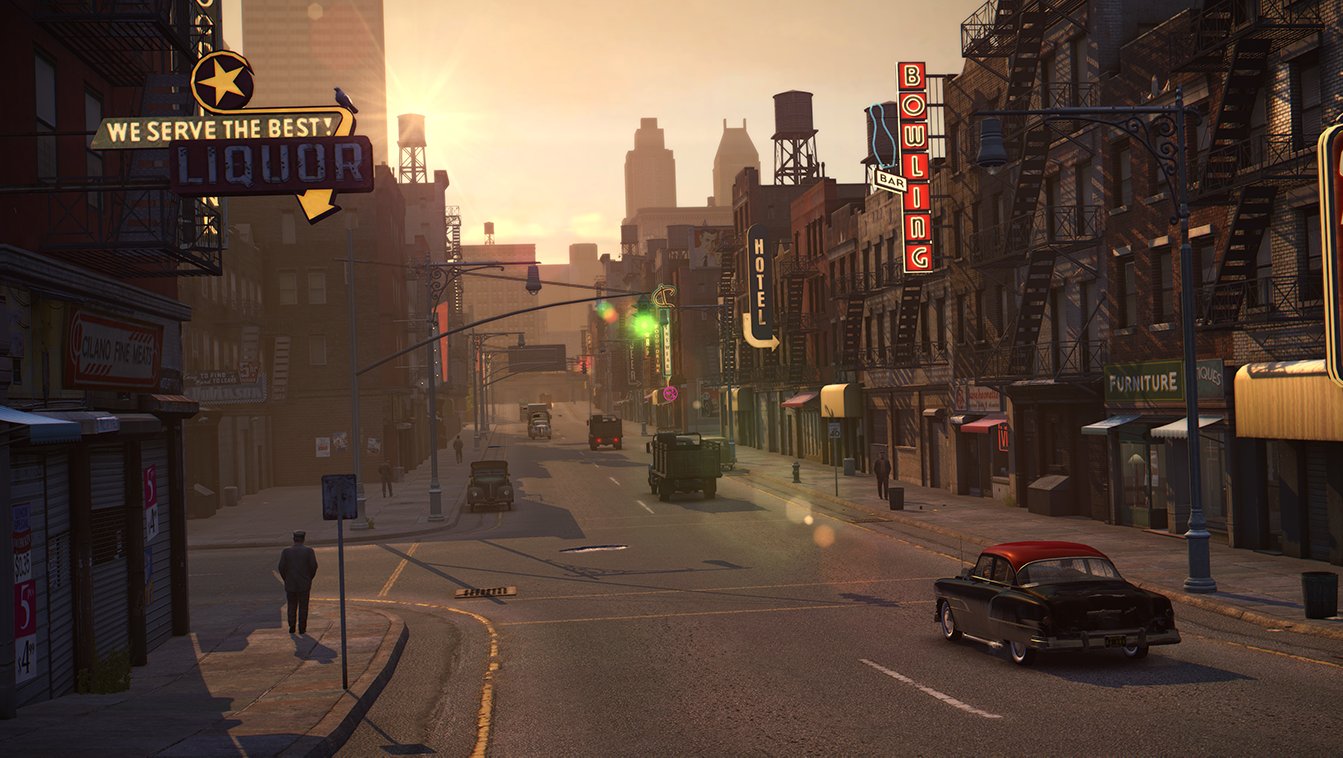 In a game driven primarily by its characters, we knew from the outset that retaining likeness was a top priority. Most characters benefited from increased geometry to better define facial features, along with skin micro detailing via higher res textures to improve the overall visual fidelity and quality, in-line with modern titles.

The topology was reworked to allow more nuanced animation and avoid unsightly pinching. However, we found that increasing poly counts resulted in subtle, but compounding changes in character appearance, so considerable effort went into making sure the characters did not alter too much. Increasing the fidelity of appearance meant animation needed to be redone or adjusted, particularly when the skeletons were upgraded to use 90 bones as opposed to the original 28. We increased the capacity of the characters to move their brows, mouth, and nasal creases, as well as improving the skin shader, so as to expand their capacity to convey believable emotion.

The lighting in the original game was particularly good for its time, so did not need a widespread overhaul. That meant we were able to instead devote time to the post-effects pipeline to give greater depth to the scene and help lift the image. This had to work in conjunction with several different areas: anti-aliasing, ambient occlusion, increased resolution of textures, and HDR.

For ambient occlusion we took the original baked AO solution and re-rendered this at higher resolution. The original game had an SSAO implementation, but it was not very accurate and did not scale too well at higher resolutions. We implemented HBAO to handle screen-space AO which really helps pick out the finer shadowed detail in scenes. 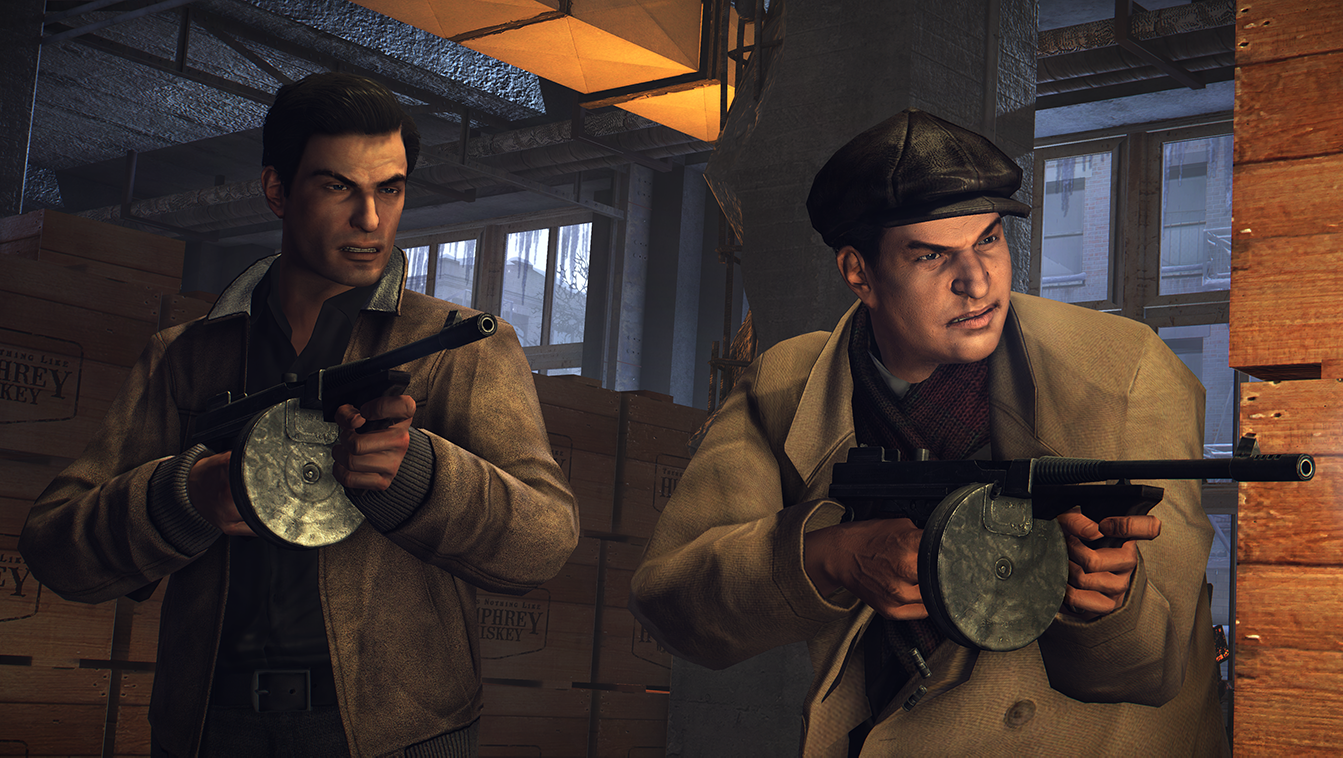 We added support for multi-sample anti-aliasing (MSAA) to remove jaggies from the edges of geometry. We coupled that with two post-processing anti-aliasing solutions – FXAA and SMAA. The end result is a dramatically smoother final image than in the original release, without any of the associated blurring that was evident in the legacy game.

For HDR support, we implemented a filmic tonemap, designed to remap the colour output of the game to the HDR colourspace. Playing in HDR, players will notice increased colour definition particularly in the most bright and dark areas of the game.

Taking inspiration from PBR material pipelines, the material definition within the game was improved via refactored shaders and reauthoring of textures. As much of the game takes place in the snow and rain, this was particularly successful on the road textures, and really showcased the changes due to contrasting material properties. We developed new technology to allow us to generate realistic puddle formations on the roads around Empire Bay. Combined with a new shader for standing water, this enabled us to add a naturalistic effect for the late game.

The original game had a number of adjustments made for console platforms, including things like reduced draw distance, reduced object population, lower quality materials and post processing and no support for APEX particles. This remaster aims to bridge the gap that used to exist between console and PC, and includes APEX particles on all platforms, along with unified materials and post-processing. We also made several global improvements across all platforms including vastly increased shadow resolution and improved reflection quality.

At launch back in 2010 Mafia II was a stunning looking game. We were however able to apply some modern techniques to give it a whole new lease on life.